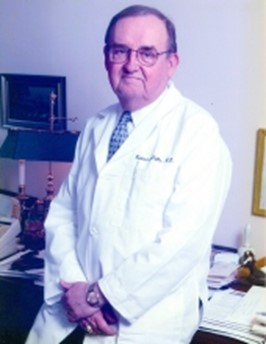 On August 31, 2019, Richard Alfred Falls, MD (Dick) 86, of McLean, VA passed away peacefully at home after a courageous battle with cancer.

Dick grew up in his beloved Binghamton, NY and graduated from North High School. While in high school, Dick enjoyed playing clarinet and saxophone with his band, the Blue Notes. Dick graduated from Saint Bonaventure University in 1955 and received his medical degree from University of Buffalo. He did his Ophthalmology training at Georgetown University after Internship at Indiana University. He was drafted to an Army posting in Okinawa and he was a proud member of the Tori medical society. He returned in 1965 to start his private practice in Falls Church.

An exemplary career followed, including being the longest serving Chief of Ophthalmology at Fairfax Hospital, doing the first cataract lens implants at that location and eventually helping to create the Woodburn Surgery Center. He has been an active Lions club member for over 40 years and that commitment to Sight and Hearing conservation led to the creation of the Lions Eye Clinic for indigent care in 1974. He oversaw the incredible growth of the ophthalmology service at Fairfax Hospital and earned many professional accolades. He transformed the lives of many patients.

The VLEIF (Virginia Lions Eye Institute Foundation) became a major focus for Dr Falls and he helped it grow to the wonderful Institution that it is today. He was a member of many local medical groups including the NVAO, Fairfax County Medical society and the Academy of Ophthalmology. He retired from active practice in 2008 but his legacy lives on.

Contributions in lieu of flowers may be made to the Virginia Lions Eye Institute Foundation.